You have no items in your shopping basket.

This control system allows a DC (direct current) linear actuator or electric motor rated to operate at 12V, 24V, 36V or anywhere in-between and with up to 480W in power to be operated by remote control. Each receiver is supplied with a ready-paired transmitter (you can select whether one or two fobs, or one hand-held remote is included below). Additional key fob and longer-range wall-mounting remotes are available to purchase separately, please be aware that only 'X3' type remotes are compatible with these receivers.

This latest iteration of the controller offers improved communication security, expanded memory (now up to 24 remotes can be memorised at once) and a built-in fuse on the output. Features carried over from the GLA-CU-X2 include selectable momentary or latching remote control modes, wired-switch control inputs, an energy-saving output timer and limit switch inputs. In most cases you can simply attach a power source (such as a mains AC to DC adapter or a battery) to the two leads with the tag labelled 'INPUT' and the actuator or DC motor you wish to control to the two leads labelled 'OUTPUT' and you're good to go.

Uses for the control unit include remote operation of adjustable beds and furniture, storage lockers/doors, home automation devices such as electric windows and TV lift systems, and other custom builds involving linear actuators or electric motors.

Please read on below for more information.

Each receiver unit is supplied with either a single key fob transmitter (as shown in the main product image), or two fobs, or a single longer-range hand-held remote, depending upon your selection from the 'Options' list. Additional fob and hand-held remotes are available separately. Each receiver is capable of remembering and responding to up to 24 remotes at a time. Be aware that this receiver is only compatible with 'X3' type transmitters from Gimson Robotics.

The smaller fob remotes are suitable for wireless control at up to 25M away while the larger hand-held remote can be used at up to 200M. These distances are based on line-of-sight operation in ideal conditions and the range is reduced if there are obstacles to pass through (particularly try to avoid passing through metal surfaces or objects which may reflect or absorb the transmissions).

As shown below each transmitter option has three buttons, for UP, STOP and DOWN. These control inputs can translate to extend or retract control of a linear actuator, clockwise or anticlockwise control of a geared motor, or any other 2-way output driven by a DC (direct current) actuator (for example pumps, winches, locks). 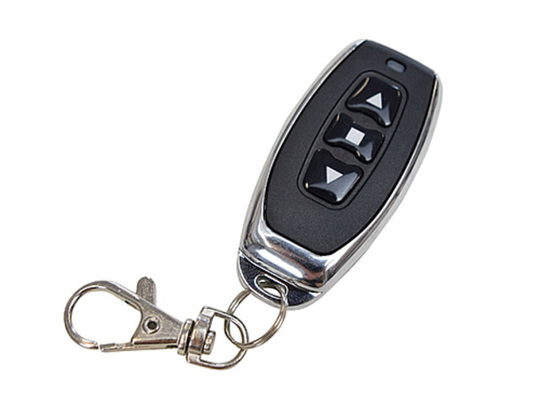 Close-up of a fob transmitter. This transmitter is waterproof, with rubberised buttons and a metal body. 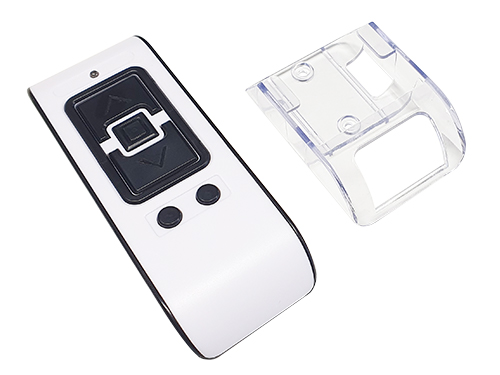 Two remote operation modes are available. 'Latching' mode (the default setting) means that if you press a forward or backward button you can release it and the actuator or motor will keep travelling in the selected direction until either the opposite direction of travel is pressed or the stop button is pressed. 'Momentary' mode will only keep the output switched for as long as a button is pressed, and will stop quickly after a transmitter button is released. Each receiver is supplied with latching as the default mode, to enable momentary control you simply need to remove the lid of the unit and remove a small black jumper from the position labelled M1 on the circuit board. Be aware that the operating range will be better in latching mode than in momentary mode, and latching mode also helps to save transmitter battery power.

The unit requires connecting to a DC supply (with positive and negative, not alternating) of between 12V and 36V (10V to 40V absolute limits). For example a 12V, 24V or 36V battery, or the output from a mains AC to DC adapter. The input supply runs through the control unit and then out to the device to be controlled and so should be rated to supply sufficient current for the device connected. The control board itself consumes only around 0.22W of power (measured current 17mA at 12V, or 9mA at 24V) when inactive and awaiting a command. When a relay is switched (and the output is on in either direction) the load will increase to approximately 1.35W (a current of 112mA at 12V, or 56mA at 24V).

It is important that the input DC current is applied the correct way around, with positive connected to the red lead and negative to the black lead.

You should ensure that the power source attached to the receiver and the device being controlled have appropriate power (voltage and current) ratings, if not sized appropriately to one-another (for example controlling a 12V motor with a 24V supply) then damage may occur.

The included key-chain (key fob) remote takes two CR2016 3V coin-cell batteries, two of which are supplied inside each remote ready for use, with two spare batteries also included in each receiver set. Spare key-fob remotes are available to buy separately, along with larger extended-range remotes.

The controller takes the input current and outputs either one polarity combination, off, or the opposite polarity combination, enabling a DC motor or actuator to operate in both directions. The output voltage will match the input voltage, so if 24V were supplied on the input then 24V will reach the output (when the output is activated). It is possible to operate multiple devices (such as a pair of actuators) from a single receiver, provided that the sum of power demands of the devices is below the maximum rated 480W, just connect the devices in parallel with the two output leads.

The maximum allowable current through the circuit is 20A continuous for input voltages up to 24V and 13A for voltages above 24V DC.

There is a 'micro' blade fuse (type APS or ATT) connected in series with the output, the supplied fuse is rated to 20A. If your power source or device being controller is not able to handle 20A then you can replace this with a fuse of a smaller value (you should use long-nose pliers to pull the existing fuse out and to replace). Blade fuses of this kind are normally 'slow blow', usually requiring a sustained current higher than their rated current for them to go open-circuit, this makes them suitable for motor loads with large short-term current spikes, but may mean they don't provide sufficient protection for more-sensitive motors or power sources, if unsure about what combination to use please contact us.

The included transmitter and receiver operate at 433MHz, a standard frequency for devices of this size which is approved for use in the European Union as well as many other countries worldwide.

The system uses a bespoke 'rolling code' data encryption method which is exclusive to Gimson Robotics 'X3' controllers, making it far harder for an unauthorised third-party to eavesdrop on a remote signal (solving a common vulnerability of cheaper 'fixed-code' transmission systems used by many garage doors and competitor RF control devices). We have tested the communication protocol against many keyfob 'cloning' devices including the YET 2130, Jane Top-A, HR MULTI 2, WHY EVO V6.2, WHY 2 EVO V7.0 and the TEC-LOQ, as yet no known cloning device has been able to copy the X3 remotes.

The receiver can selectively memorise which remote transmitters to respond to; in this way a single remote may control one or multiple receivers, or one receiver may be controlled by one or multiple remotes. Each receiver can store in memory up to 24 separate remotes at once. Many separate remote and receiver pairs may also be used independently in the same area provided that they are programmed separately from one-another (and provided that the remotes aren’t pressed at exactly the same time, which could cause them to interfere with one-another). To program remotes follow the steps below:

If you wish to reverse the remote operation (so that the travel of the connected motor or actuator is reversed for a given command) then follow the previous learning steps but in the opposite order (P3 UP to remote down button, P1 DOWN to up button).

To erase the memory of all previously programmed remotes press and hold any of the white buttons on the board for around 10 seconds. The red LED should turn on initially as you press and then after a long pause turn off which signifies that the memory has been cleared and you can then release the button. Check that the memory is erased by attempting to use any previously programmed remotes before re-programming them.

Although normally covered by the plastic housing, the unit has a row of screw-terminal connectors on the board which may be used as an alternative method of input and output power connection if you remove the supplied leads. Be sure to observe the correct polarity of the input supply if using these terminals.

A pair of limit switch inputs are available towards one corner of the board (marked L1 and L2). These are supplied with two jumpers which bridge each connector pair, if you wish to add limit switches to your device you will need to replace these jumpers in the circuit with switches which are mounted at the desired end points of travel. These switches should be 'normally closed', only going open-circuit when a switch is triggered. A lead with four-way header connector is included to enable access to the limit switch inputs.

Further inputs are available if you want to add a physical (wired-in) switch to control the receiver (such as our wall switch), these are denoted on the board by 'UP, GND, DOWN'. If 'UP' and 'GND' are connected to one-another via a switch then the receiver will change the output to 'UP', if 'DOWN' and 'GND' are connected then the output will change to the opposite direction. Any inputs supplied to the board here will override instructions given by remote transmitters to the receiver. A lead with three-way (white plastic) connector is included for connecting to these inputs. 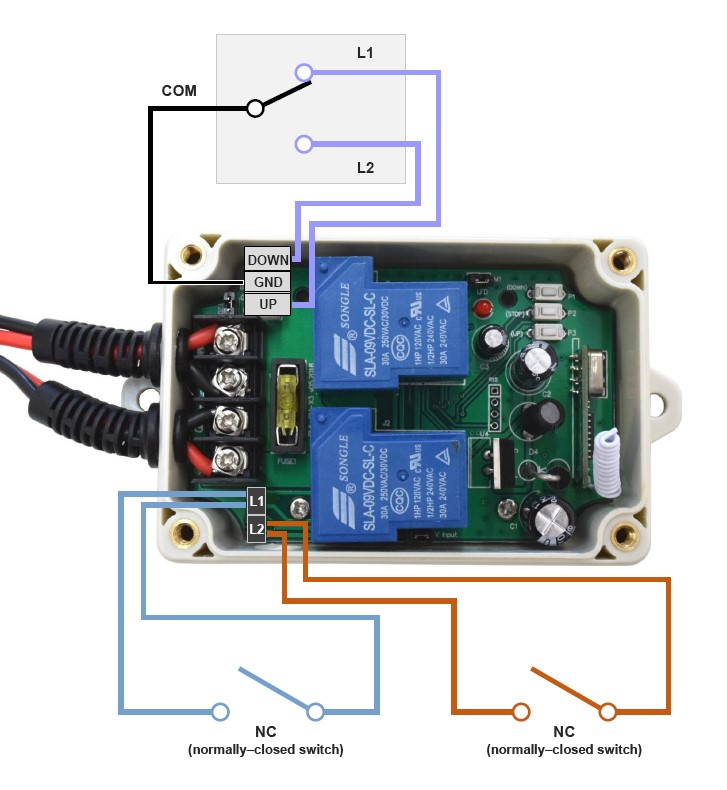 The receiver has an optional timer function (enabled by default), which automatically switches off the output in latching mode if no new control instruction has been received within 120 seconds. This feature can help to save energy by minimising the time that a relay is being powered (whereas otherwise the relay would continue to operate until a ‘stop’ button were pressed). To disable the timer remove the black plastic jumper from the position marked ‘120S’ on the PCB (by the wired-switch input connector). 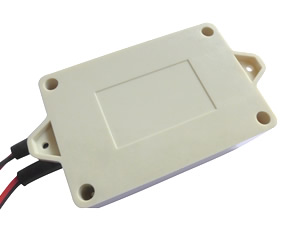 The unit is suitable for outdoor (high humidity) use provided that it is shielded from water exposure, the enclosure itself is not waterproof.

The input lead pair (red and black) is approximately 300mm long, while the output pair is ~220mm long. The leads have a highly flexible thin-strand core with a 1.3mm2 (16AWG) conducting area, combined with heat-resistant silicone insulation. Each of the lead pairs is clearly labelled with a plastic tag (an example of this is pictured below). The cables exit the receiver housing with flexible multi-directional rubber grommets, also pictured 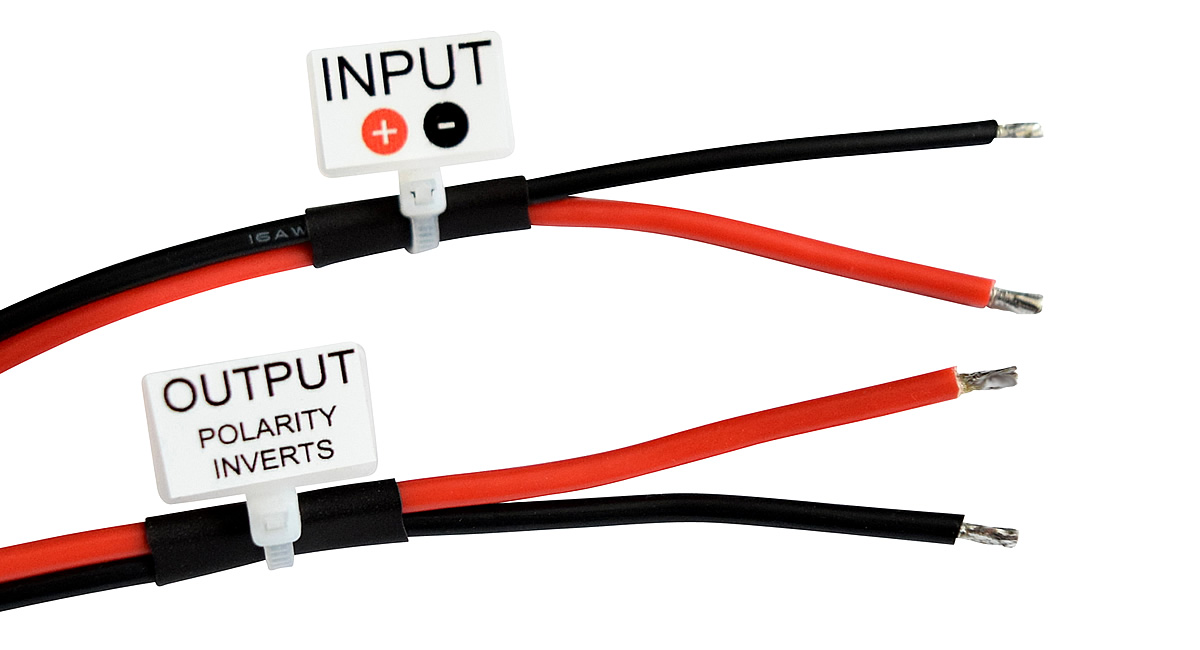 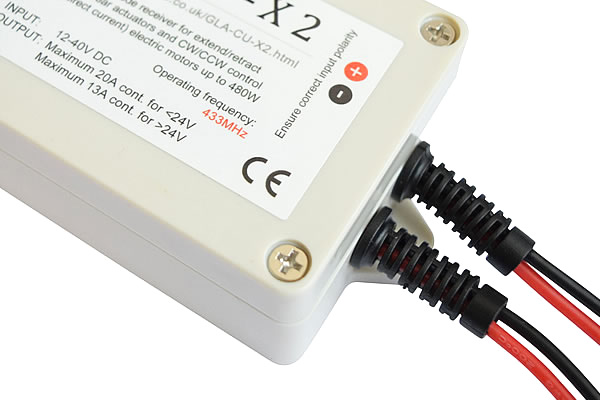 Two screw-terminal connector pairs (rated up to 16A continuous) are supplied mounted to the ends of the leads, not shown.

If you have any queries about this item, including requests for bulk-pricing information, then please contact us

High quality compact fob remote for use with the X3 control system, with improved security